What can French really sell to Chinese ?

What can French really sell to Chinese ?


The central problem that destabilizes the past few years in France, is its disastrous performance in foreign trade : in 2011, a deficit of 70 billion euros , or 2.3 % of its GDP. It thus comes very close to the record trade deficit , which was reached in 1982, when it reached 2.5% of GDP.
This year, a disastrous record was reached, therefore , essentially a stimulus policy in France was extreme and unilateral times . What is worrying now is that our execrable in foreign trade score is not articulated at all with such an excessive strength of domestic demand, but spring indeed lack of competitiveness changes we are experiencing now . 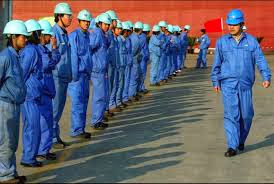 Our exports to China only cover 33 % of our imports from China , when our exports to Germany still cover 81% of our imports from Germany. Obviously, there is therefore a dysfunction in our trade with China is both specific , important and disturbing .
And we know the origin : the major international organizations ( World Bank, IMF , UN ) tell us that the euro should normally be around 4.52 yuan , but China , thanks to a draconian exchange controls which it has a monopoly and that allows him to control the exchange rate of its currency, we continue to inflict euro remains stable at around 8.32 yuan, an overvaluation of 84%.
And the overvaluation of the euro is maintained by China even despite huge adversities facing since mid-2010 on the countries of the euro area.

But back to the coverage of trade between France and China : the rate already exceptionally low , at 33% , is likely to reduce further because in the coming years , our industries will be subject to all kinds of adversities for export to the Chinese market.
First, our basic exports to China manufactures will continue to suffer as the exchange rate euro / yuan is also evoked by pénalisateur .

Even in terms of auto exports , the outlook is very unfavorable , with only Germany still manages to export high -end cars ( Mercedes , Audi, BMW ) . Peugeot and Renault, he manages to get an industrial plant in China will , like other Western manufacturers in China producing standard cars they are still selling .
In terms of TGV , where France is exceptionally well positioned internationally , China has deployed an aggressive strategy to negate the Chinese imports. After purchasing from Shinkansen (Japan) and Siemens (Germany) the technology , it has track national champions , CSR and CNR , so importing the least possible TGV and barging in export. It is true that this strategy was a masterful setback with the collision took place in July 2011 between the TGV viaduct in Wenzhou on the Beijing -Shanghai line . But China has not given up and will remain closed to exports of French TGV .

In aeronautics , where France, Germany, remains well positioned , China makes its aircraft orders and helicopters on two conditions: EADS and Boeing have to accept a transfer of technology to get orders, which undermines the long-term evolution of aircraft orders and helicopters from China . In the short term , an increasing proportion of orders sent by China to be produced locally. Thus , the outlook for our exports , both in the short and medium term , there is also disappointing.
For nuclear power plants, the Fukushima disaster disrupts the prospect of Areva export to China . Thinking about the safety of nuclear power plants that undertaken the Chinese government will delay the construction was scheduled nuclear and China, which will be part of the club now very few countries buyers nuclear power plants, will not fail to enforce vis-à -vis the same requirements as Areva against Areva and Boeing , which also limit exports.

Are exports of luxury goods from France to China. They continue to behave very well. It purchased by the richest Chinese, French brands are the matching label "made in France " . The French luxury companies , unlike the others, so translate into actual exports the sales they make in China. This is a very good point for our exports. But of course , we can not rely on this sector alone to rectify our manufacturing trade with China products. In cosmetic France has big advantage, see this article about this Topic


About Culture and media

And also , the Chinese government in recent years , in its super- mercantilist strategy to always control over the global manufacturing industry , has decided to not overlook the arts and crafts or fashion and luxury or cultural products and audiovisual media. We thus emerge more strategic analysis of China who rightly insist on the role of "soft power" of the country for success in these areas that are not at all marginal .
The french leader in Luxury is LMVH

These Chinese analysts welcome the decline that began in their view, the "soft power" of France , which China has long envied us and welcome also control which China is trying to seize the international market art ...
We see exchanges between France and China are not going to rebalance . At a time when , increasingly , we rightly refers to the need for reciprocity in trade between countries, China stands out and we impose a lack of reciprocity will become increasingly destabilizing and more more unbearable .


In terms of TGV , where France is exceptionally well positioned internationally , China has deployed an aggressive strategy to negate the Chinese imports. After purchasing from Shinkansen (Japan) and Siemens (Germany) the technology , it has track national champions , CSR and CNR , so importing the least possible TGV and barging in export. It is true that this strategy was a masterful setback with the collision took place in July 2011 between the TGV viaduct in Wenzhou on the Beijing -Shanghai line . But China has not given up and will remain closed to exports of French TGV .